Buy GOLD and PROTECT your Wealth

The market for Bullion is highly liquid with an extensive trading network. This ensures competitive pricing and ease of selling internationally. With an added advantage over the KrugerRand in the sense that if needed, it could be smelted and used for the manufacturing of exquisite jewellery

Regardless of the current financial recession occuring Worldwide, Gold’s consistent Growth measures a return of 700% in 14 years.With a short-term goal, growth of a 60% return in 5 years has been recorded since 2010 until present day 2015.

From the beginning of Islam until today

Gold and silver are the most stable currency the world has ever seen.
The Dinar was the first gold coin introduced into circulation and thus became the base weight which was multiplied or fractioned into smaller denominations with halves, quarters & sixths of the Dinar.
We now bring the Zahab Coin first minted in the first half of 2015 which weighs six times more and in conformance to the weight standard of the Dinar (4,25g).
From the beginning of Islam until today, the value of the Islamic gold & silver currency has remained surprisingly stable in relation to basic consumable goods:
Historical Fact: A chicken at the time of the Prophet, salla’llahu alaihi wa sallam, cost one dirham; today, 1,400 years later, a chicken costs approximately one dirham.
In 1,400 years inflation is zero. Could we say the same about the dollar or any other paper currency in the last 25 years?

A victory would signal an end to a conflict or competition, and so the palm developed into a symbol of peace.

The palm is richly significant in Islamic culture, and the palm symbolises rest and hospitality. The presence of palm trees around an oasis showed that water was the gift of Allah.

Date Palm,
the Tree of Life

“Beautified for people is the love of that which they desire – of women and sons, heaped-up sums of gold and silver, fine branded horses, and cattle and tilled land. That is the enjoyment of worldly life, but Allah has with Him the best return.” Surah Al-Imran v14 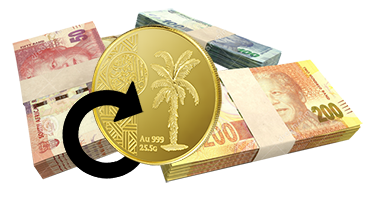 Fortunately, there has always been a liquid market for gold, silver, platinum and other precious metals, so you will never have to worry about liquidity.

We guarantee that we will Buy Back any gold coin purchased from us.